The Tax Cuts and Jobs Act

Because the Tax Cuts & Jobs Act made so many sweeping reforms to the way individual and business income taxes are calculated, it’s crucial for tax preparers to be up to speed on the many changes this law brought. From the end of itemized deductions (in all but the rarest of cases) to an extra tax break for S corporation, LLC, and sole proprietorship income, the new U.S. Tax Code brings some major benefits (and, sometimes, drawbacks) to just about every taxpayer.

Read on to learn more about the impact of the Tax Cut & Jobs Act’s main provisions, how they've affected tax preparation services, and what every tax preparer should do to brush up on their Tax Cuts & Jobs Act knowledge before the next tax season begins.

What is the Tax Cuts & Jobs Act?

In late 2017, the Tax Cuts & Jobs Act was signed into law, with many of its reforms slated to take effect on January 1, 2018. Many of the TCJA's reforms to business taxes are permanent, while most of the reforms to personal income taxes expire in (or before) 2025.

Some of the changes enacted by the Tax Cuts & Jobs Act apply to only a small subset of taxpayers and therefore aren't widely known or written about. However, others apply to far more taxpayers. Some of these common changes include:

Many businesses still aren't taking full advantage of the benefits afforded by the Tax Cuts & Jobs Act, while others may need to restructure or refinance in order to avoid a tax hit. After getting a handle on their tax bills for 2018, some businesses are meeting with a tax adviser for the first time to try to avoid similar surprises in 2020 and beyond. 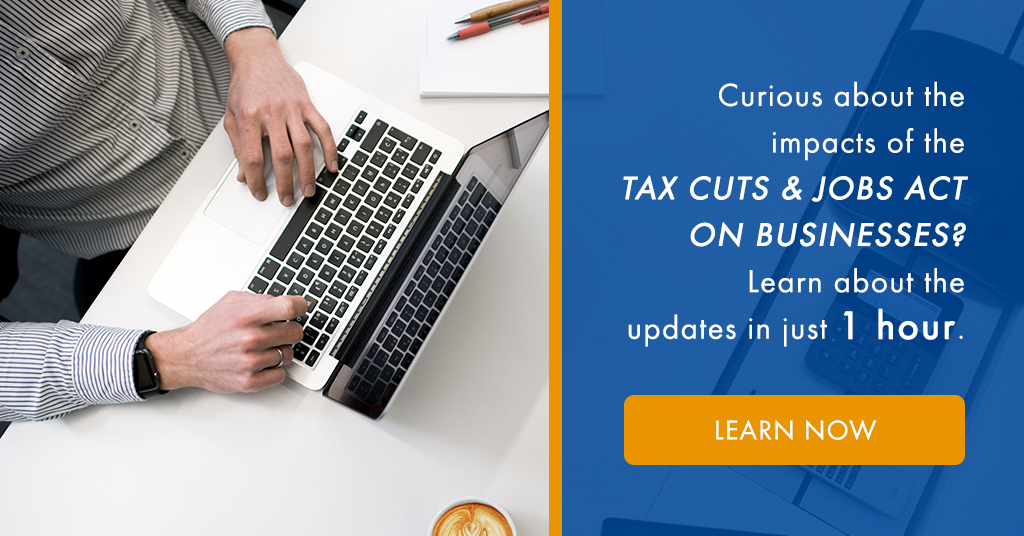 Because the Tax Cuts & Jobs Act didn't directly impact individual (and certain business) taxpayers until they filed their 2018 income taxes in early 2019, the broad effects of this law are only now being realized.

On a macro level, the Tax Cuts & Jobs Act has significantly boosted job creation in the states with low (or no) state and local income tax rates.

2019 also marked a five percent increase in the number of taxpayers who owed the IRS instead of receiving a tax refund.

But despite this, just about all taxpayers can derive some benefit from the increased standard deduction.

Taxpayers who own and operate small businesses may also be able to benefit from the 20 percent deduction on business income.

Taxpayers who have already engaged in some estate planning (like drafting a will, guardianship documents, or a trust) may need to revisit these estate plans in the wake of the Tax Cuts & Jobs Act changes.

The Tax Cuts & Jobs Act has also been a boon for the tax preparation industry—although not without some growing pains.

What the Tax Cuts & Jobs Act Means for Tax Preparers

In the long run, tax preparers can and should benefit from the Tax Cuts & Jobs Act. Taxpayers who feel ill-equipped to tackle their taxes themselves and who use a tax preparer for the first time can quickly realize how helpful it is to have the guidance of someone who knows the ins and outs of the U.S. Tax Code. Many tax preparers will see an increase in the number of repeat clients they have.

It's likely that the significant increase in the number of taxpayers (and small businesses) who use tax preparation services will encourage more students and job-seekers to enter this field. This could increase competition over the next few years. With so many of the Tax Cuts & Jobs Act's changes scheduled to remain in effect until the mid-2020s, there's still plenty of time for new tax preparers to get started.

And the Tax Cuts & Jobs Act isn't a static law. As with every sweeping piece of legislation, there are unintended consequences that need to be corrected, and legislators have been hard at work tweaking the law to better reflect their original intent. Because many of the individual tax cuts and changes expire in the mid-2020s, after at least two more national elections, it's likely that the Tax Cuts & Jobs Act will be extended or continued in some form even beyond this point.

This makes it more important than ever for tax preparers to stay up to date on their required continuing education (CE), with a particular focus on Tax Cuts & Jobs Act updates. Taking a "one and done" attitude toward the Tax Cuts & Jobs Act after familiarizing yourself with the 2018 changes could mean operating with outdated or incorrect information. 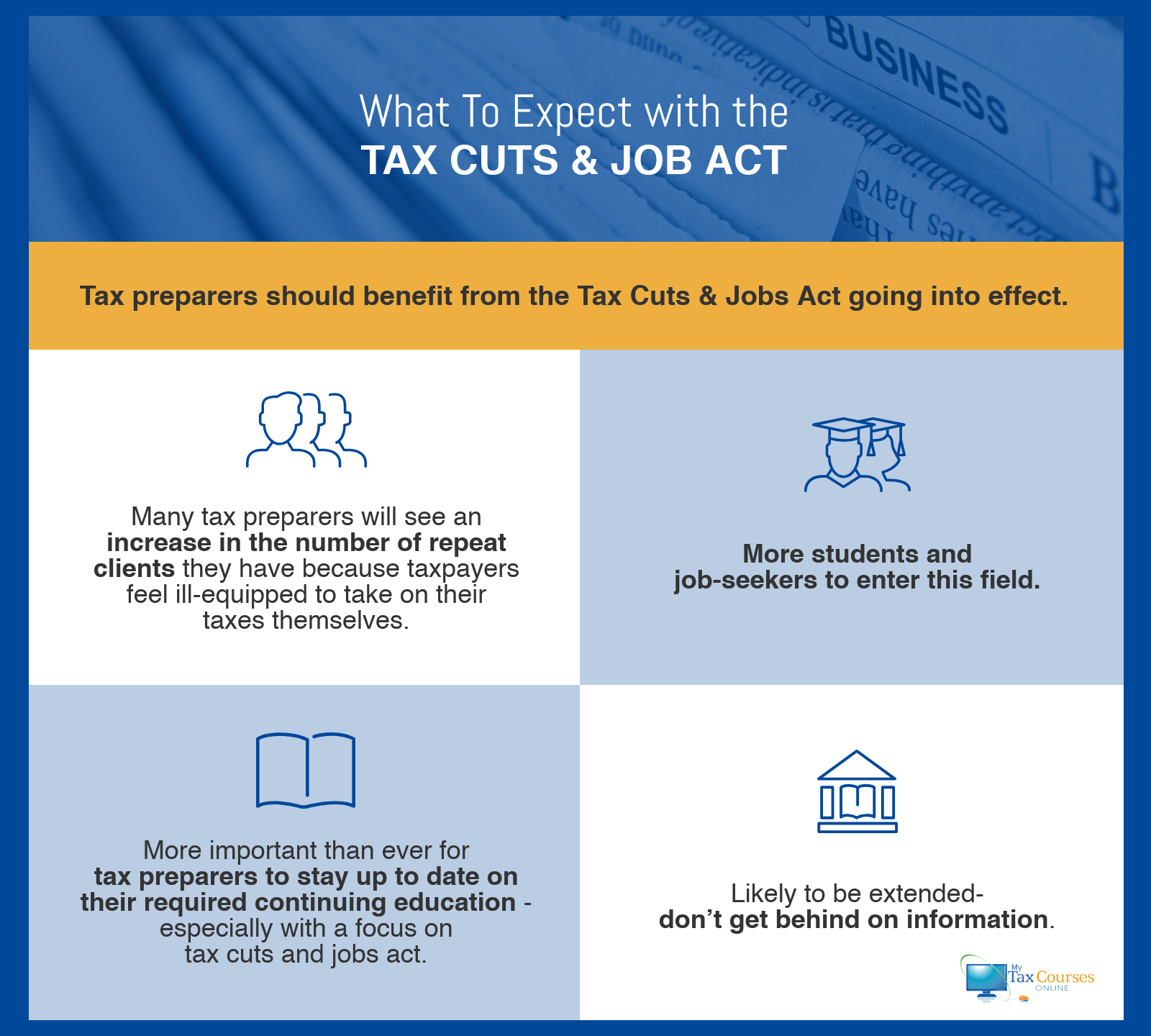 How to Prepare for Tax Season

The 2020 tax season is coming up before you know it, and with Congress back in session at the end of summer, it's likely that more changes are on the way. It's important for all tax preparers to get up-to-speed on updates to the Tax Cuts & Jobs Act so that they can advise their business and individual clients on how best to maximize their tax savings for the upcoming year.

My Tax Courses Online offers a free update course that counts toward your Annual Filing Season Program (AFSP) record of completion. With no cost to complete, this course is a no-brainer, especially for tax preparers who plan to participate in the AFSP (and be listed on the IRS's registry of enrolled tax preparers) for the 2020 tax season.

My Tax Courses Online also has a wide array of Tax Cuts & Jobs Act-focused courses, from refreshers on business income taxation to courses that are focused on individual taxpayers' needs. Even if you haven't stayed on top of the Tax Cuts & Jobs Act changes, you can quickly familiarize yourself with them by taking some of the courses available on MTCO's website.

It's undisputed that the Tax Cuts & Jobs Act's changes are the most sweeping the U.S. Tax Code has seen for generations. Tax preparers who want to remain viable in an increasingly competitive field should make it a priority to stay up to date on Tax Code changes, from the initial implementation of the TCJA to the updates likely to take effect during each new tax year. Maintaining expertise on all the most recent Tax Cuts & Jobs Act changes can encourage client loyalty and increase the number of word-of-mouth recommendations you receive.

My Tax Courses Online can help. With thousands of hours of IRS-approved video courses available online, My Tax Courses Online has all the most current information about Tax Cuts & Jobs Act changes. And because these video courses are available through an easy download, you're free to complete them at your own pace and on your own schedule, printing out your record of completion as soon as you're finished.

Use Coupon Code
BLOG
to receive $10.00 off your order today.

Everything You Need to Know about the Annual Filing Season Program
Do you Aspire to a Higher Degree of Professionalism?
Using Section 199A how much can I deduct with a pass-through?
2020 PTIN Renewal Season Now Open
Who should be concerned with the SALT deduction?